A Love Letter to Kauri by Samuel Te Kani

A celebration of New Zealanders' love for Kauri. 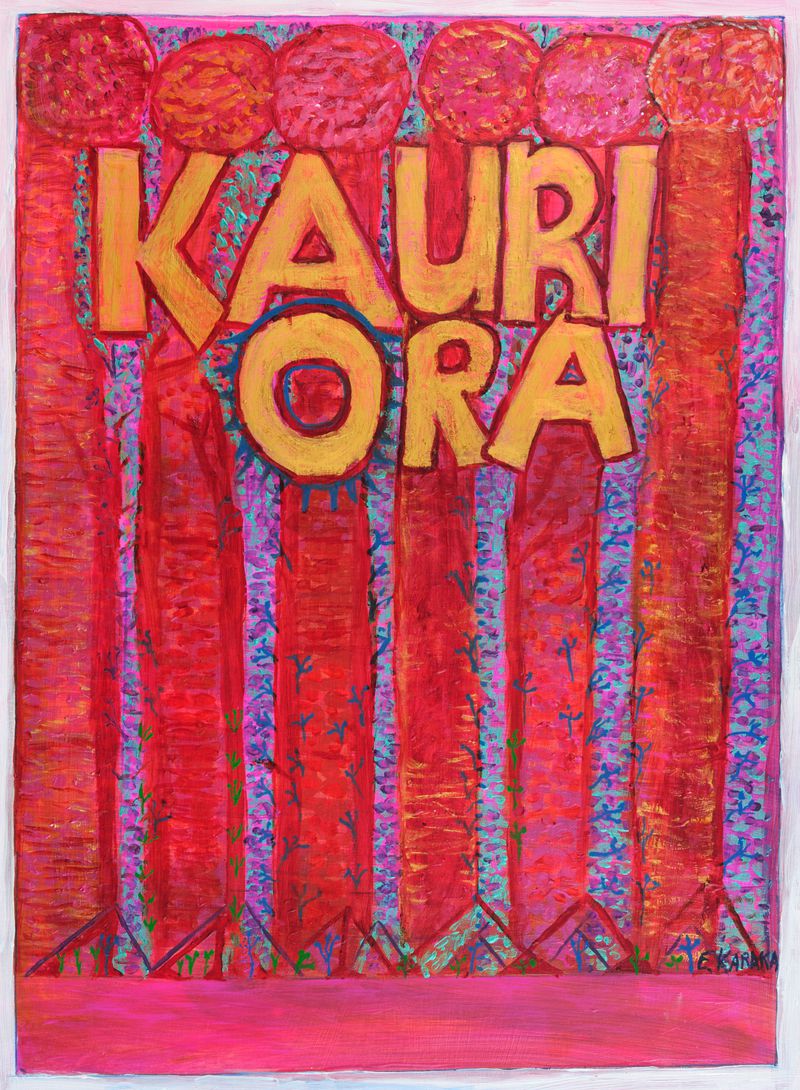 This collaborative project between McCahon House and The Kauri Project, with the support of Te Kawerau ā Maki, acknowledges the co-dependent relationship between the health and wellbeing of all nature – humanity and the natural world. We celebrate the mighty kauri tree as the godfather of Aotearoa’s native flora and fauna.

A love letter to Kauri

Fascination with trees transcends the strictures of genre. From Anglo-Saxon fables about enormous Home Trees sheltering the world’s creatures in its Eden-like genesis, to the pensive bugbears of Tolkien’s forest guardians, the thread of tree-wondering is a long one with many gorgeous tangents. Little wonder that New Zealanders have such spiritual fealty to their natives, which any bush-trail infographic will tell you is a unique pantheon, each with its own gnarled characteristics and its own place in myth. What then underpins this nearly universal habit of looking at trees?

For starters, there’s the story of Rata forgetting to thank the protector-spirits of the forest before felling trees to make his waka. Here, there’s more to take away than the abject fear of gods in wrath. A figure of national virility akin to Māui, Rata is forced into a new relationship with his forest-surroundings. In meting out the necessary appeasements, he begins to experience the forest and trees as neighbourly beings in a living circuitry. Trees with personhood, trees as fellow members of a diverse community. In a flash, Rata discovers a richer world in which he coexists with tethered-entities as significant to his hero’s journey as humans. Networked beneath the ground and in the soil, as Māui to his own ancestors and descendants. Living entities with needs overlapping and intersecting with the world-making of tangata whenua, still, despite the proliferation of cities and so many presumptuous veins of concrete steel and glass. So presumptuous we might forget our shared origins - the earth, the soil.

With so many bush trails up north, my favourites being the ones cleaved to mountains and teethed with volcanic scoria, I remember being told that two totatara trees entwined like wedding arches made a portal. That when you pass through, you’re actually crossing some liminal veil marked by the handholding of these natives. I can’t verify this in lore, just the hearsay of locals and the impression of forest-magic left on me every time we found two such trees, meeting in the uncanny shape of a doorway. I can only imagine the local lore around kauri in their numbers and especial gathering in the north, holding together the country’s whittled tip like thonged timber holds the spearhead. In totara the fairy-ring trickery that spirits away the unwary, and in kauri the stronghold magic of bones.

Between sky-father Ranginui and earth-mother Papatūānuku, kauri scaffold all the gorgeous empty spaces in which tangata whenua have been afforded their dominion; a canvassing for story, play, dance, worship. In that tension of keeping lovers of sky and earth apart, kauri don’t buckle, they don’t sweat. They barely tremor in time’s march as amorous gods are kept at bay, staring longingly at one another, while their children bask in this new terrestrial arrangement. This is the way it is. But perhaps their children forget the shaky contingency of this order with the kauri, its stacked and groaning bones, and think the closing of day further off than it really is. And yet the kauri don’t buckle.

Cities have parks, a given. But beyond their aesthetic value, parks and gatherings of trees amidst the urban monotony engender the kinds of delicious relief normally reserved for the annals of tourism. Kauri are these but more, and like the strategy of parks to soothe urban desolation, they speak a salve. Even in the forests where they staunchly hold up life-giving canopies like the central-pillar of some florid pavilion, for which Tāne Mahuta gets an honourable mention. A prehistoric gargantua, a living god. Giving shelter and relief to those on the ground. Holding-to and holding together as the world turns around it, in teeming forest society a kingly pivot.

Emily Karaka’s work brings all this into blazing focus. In the midst of a die-back pandemic (not dissimilar to ours) effecting kauri forests on a massive scale, Karaka’s vision reinstalls kauri not as scenery, not as prettifying icons of the great kiwi pastoral, but as pillars. As the muscle of the land, guardians as mighty as they are attentive in the ever-listening sprawl of root-systems which hold us in place. More than the fodder of a once sterling industry which economically buttressed the far north, and now rests in skeletal ruin. Kauri ancestors then, still living even if under threat. And so, like the communities of the far north, proudly showing their resilience, ‘we are still here’ they say in dappling light. We are still here.

The view from the top of the cliff